I am lucky to have a new metro station near my home – Nádraží Veleslavin. It is now used by many tourists arriving from or returning to the airport. Since it has opened, I have noticed that the controllers are there very often. That is OK; it is a busy station. What I consider not OK is that far too often I find them engaged in levying penalties on tourists returning to the airport. The foto above shows the most recent example. If you look carefully you see that the controller is holding all six passports of that group.

In the last 12 months I have personally encountered similar situations at the station. I believe my memory serves me well enough to assert the following as facts (in some cases I have more fotos, to back up my assertions)

In one of these cases, a young Korean couple had no cash. The controller was insisting that they must go to the nearest ATM, withdraw money, and pay the penalty. When they told me their flight was due to leave in an hour and a half, I told the controller I would pay their penalty. She readily accepted, without any apparent sense of shame. The young Korean guy insisted on taking my contact details so that on his return he would repay me.

In another case, (see foto), the controller can be seen accepting payment in Euros. DPP have confirmed that this is not allowed. One can only imagine what exchange rate the controller used in this transaction. 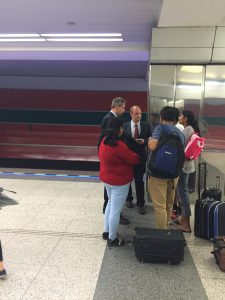 In the foto above, we can see the same inspector at work as in the first foto. Both victims are a group of mainly female South Asian tourists.

We know why this happens. We know that the controllers earn a bonus for every penalty they levy. They in turn know that the tourists are easy targets because they frequently find the ticketing system difficult to understand and use. In my experience so do Czechs who don’t live in Prague!

The reason to have penalties is to persuade people to make sure in future that they fully understand and respect the system. Of course I know that many Prague residents choose to ‘ride black’, and sometimes react aggressively when caught by the controllers. But it is those people who need to be caught. Every time they ride without paying they are costing the rest of us, who pay for DPP both with our tickets and through our taxes, more money.

Tourists, on the other hand are usually unlikely to return to Prague. Those who are caught will go home and tell their friends that their weekend in a beautiful city was very nice, but right at the end there was an intimidating, stressful encounter. Their friends might be put off visiting Prague themselves. After all they have already heard about the taxi drivers (even if progress has been made in this area).

Some friends have commented that the mentality of the controllers is the issue. I don’t agree. They have a job to do, and sometimes, as I have seen in the central stations, it is not easy. The blame lies with their managers and the senior management of DPP, as well as City Hall and city politicians. These are the people who have failed to train the controllers to concentrate on the offenders who matter: the local, regular offenders.

Now I have to say, my colleague does not agree with me. She thinks that a tourist should prepare for a visit and know the rules. That includes the rules of public transport tickets. In principle of course, that is true. I try to do this myself. In practice I find that reading about a transport system in a guide book does not prepare you at all for the real thing. And when you come face to face with the real thing, you may be jet-lagged after a 12 hour flight from Seoul, and nobody around you looks like they might help you.

I am arguing that the controllers should be told to exercise discretion, especially with tourists. And most especially with tourists who can show that they have bought tickets. Tourists, especially the Asian females that the controllers seem most interested in, are here expecting to spend money. Why would they seek to deliberately avoid paying the correct amount for an item which is already very cheap? But currently the controllers have no training and no incentive to exercise discretion. Much easier to stop and harass a little Chinese girl, than a big aggressive lout from Kladno, right?

My Czech teacher actually has a great example of ‘showing discretion’. Last year she spent several weeks working for Berlitz in Dresden. She bought two monthly public transport passes, and Berlitz took them from her to arrange that they would refund her the cost. By mistake, the Berlitz person gave her back the pass for the first month, which was already out of date. She went back to her hotel on a tram, and there was an inspector. Only then did she realise that she had the wrong pass. At first of course the inspector wanted to fine her; when she did not have the money, he wanted to see her passport; when she said it was in the hotel, he asked which hotel it was; but when, in some distress, she said she could not remember the name, but only the name of the tram stop, he realised that he was not faced with a criminal. So he relented, and actually gave her a ticket so that she could continue her journey, while requesting that she take care to have everything in order next time.

Now, how do you think my Czech teacher feels about Dresden, and about German people? And how do you think the people in the fotos feel about Prague, and Czech people? And does it matter? Well, when Prague City Tourism estimate the value of accommodation services alone at CZK22 billion, that should be enough to tell you that it matters a lot.

In the next post, I will discuss what I think the Prague ticket inspectors – and their managers- tell us about the current state of Czech society.