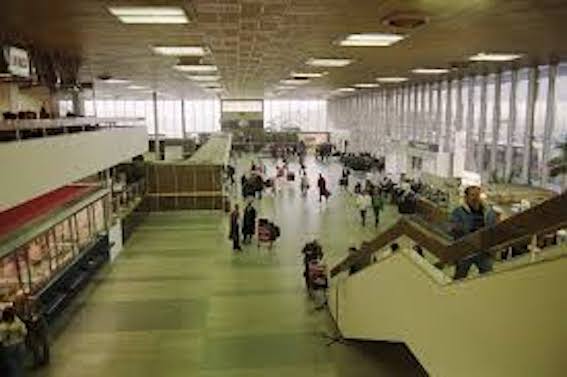 Late November, 1992.  Prague had been cold throughout my visit, but at the airport, built on high ground, there was another weather problem: fog.  And the airport had no modern fog landing equipment. All flights were suspended, and in the terminal building it was chaos. I had been visiting privately, staying in a rented room near Wenceslas Square. The queue for the phone boxes was huge, and anyway even if I managed to call the owner, we spoke not a word of each other’s language. I passed by the Avis car hire desk, and something about the young lady there made me act on impulse.

My reply was shameless  “Well, I don’t need a car, but I wondered if you might help an Englishman in distress”.

To my huge surprise and delight, she readily agreed to call the apartment owner and confirm that I could return for another night. I thought it might be presumptious to ask her name, but she had made her mark. Avis car hire desk, and I’m good with faces. I would remember her.

A few months later, as Client Service Director of DDB Prague I returned to the airport, and there she was; I asked Helena if she had ever thought about a career in advertising. “yes, actually I have”, she replied, and within a few weeks she was installed as Account Manager working on McDonalds.

The funny thing was that for all my experience – I had been on the “Board” at the BMP DDB London agency – I had never been responsible for recruiting any of my team.  Now, in the exhilarating turmoil of  the new Czech Republic, I had discovered that the single biggest barrier to doing business of any kind was the lack of people. I realised that I’d approached Helena because she seemed to me like someone whom I could imagine working in advertising if she had been in London. She was approachable, service –minded, quick-witted, goal oriented. It seemed like a miracle that such a person could be a product of  Communist Czechoslovakia, and an even bigger miracle that such a person could master the basics of advertising in months. But she was not the only one; all the major international agencies, and many big international companies were already here in Prague, and hiring young people. Nevertheless, the question was, how and where to find them? Helena, after all, had been a lucky break.

In the UK, as am employee I had at an early age discovered that recruitment consultants were nearly always used by companies and agencies to hire new people in marketing, and these consultants were always specialists, either in client marketing roles, or in advertising (and rarely both). I remembered well the good ones, and the not so good ones. I remembered that the good ones looked at a candidate and asked “where will this guy fit in well and make progress?” rather than just finding an excuse to send the c.v. to the client and hope for the best. I had heard about an American guy who had started a recruitment agency in Prague – I think it was called Personnel Select – and was filling advertising jobs. We briefed them. They sent us a c.v. …of a policewoman. There were no assessment notes to accompany the c.v. I tried to be optimistic; I suggested to Viliam Gracz, the young agency CEO, that maybe they had seen something positive and relevant in the policewoman’s attitude, as I had done with Helena. He called them, and then reported back to me that he doubted they had even interviewed her.  She was just looking for a job, any job. I realised that when the entire market economy was only 3 years old, a c.v. would not be much help.

But I had developed the hunting instinct. Almost any young Czech I met was a potential recruit. I made the first “poaching” hire; Saatchi&Saatchi had actually tried to poach me almost as soon as I had arrived and more than once mentioned their young star account manager  who worked on P&G. I arranged to meet her, but she was not inclined to be poached. I had to think carefully about the positive reasons why moving to DDB could be good for her, and eventually she agreed; and it turned out to be a good move for her and for DDB.

Serge Pycke was my favourite client, a Belgian national working for Molnlycke/SCA. One day he remarked “You seem to be quite good at this recruitment, Richard. Perhaps you could find us a brand manager…” I thought about whether this could be a DDB service in such an entrepreneurial time, but quickly dismissed the idea. And then a few weeks later, I opened up my copy of the British advertising industry magazine, “Campaign”, and there was a full page advertisement. In bold white text on a black background, it said simply “If you want to talk about jobs in advertising, talk to someone who has done the job”. It was the launch of the recruitment service of Gary Stolkin, who had previously been a senior executive in a couple of big advertising agencies . That’s it, I thought. That is my own new business proposition, right there.  DDB and I were rapidly becoming frustrated with each other, and I knew it would not be much more fun in the other agencies. But being in Prague was a lot of fun.  And it seemed like anything was possible. I discussed the idea of starting the service with Serge and Stig from Molnlycke, with John Goodman, the British CEO of Ogilvy Prague, and with Brid and Elaine, the Irish managers of Radio Kiss. All said the same thing. If you do this, we will have the briefs for you the day you open the door.  It was a business waiting, begging to happen.

I have always been a cautious low-risk person, yet it took me a maximum of two weeks to decide I was going to do it, to launch my own business, with no 3 year plan, no cash-flow forecast, no market research. But the overheads were negligible. I’ve always said that to do my job you need a computer, a phone, and half a brain.  My English friend Jo Weaver offered me space in the office of her newly started promotions agency. One apparent problem was that it took on average 9 months to register a new business, but Jo offered that I could start trading through her business. So the Commercial Register indicates that the lawyer told me “Good news, the company is registered, you can start your business” in June 1995. But by then I had already made 17 placements with 10 different clients. I hadn’t needed a full page advertisement to tell the incredibly tight Prague business community that the clumsily named “RH Marketing Search” was open for business.

I never mastered the sport of surfing. But I imagine it feels much like I felt in the winter of 1994/95. It was exhilarating.

But would I, could I, stay upright ?…

Below are links to people mentioned in this chapter, where I was able to find the links. If you are one of them…thank you!