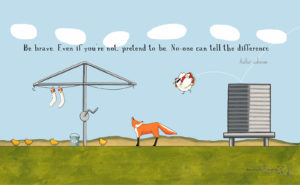 I didn’t have a plan.

I mean that I didn’t have a business plan. I had no financial plan, cash flow or P&L forecasts. Looking back, I am even more shocked that despite all my training, I had given little thought to the “brand” I was creating, no competitor analysis, no SWOT analysis. Of course for several months I was not even legally trading; yet nobody cared, least of all the clients. They wanted me to find them people. Fast. Like, today. And to my surprise, when I did , they all paid the fees.

At Ogilvy, John Goodman urgently needed a media planner. A woman came in with some vaguely relevant junior experience , and seemed capable. I told her about Ogilvy; she seemed interested. I rang John while she was still with me (as I remembered a headhunter in London doing with me, as a candidate). He was interested. Can she come later today, he asked. Sure, she agreed. By 18.00 John called me back. He had seen her. And hired her. I duly prepared and faxed the invoice.

Next day John sent me a fax, it read:

“A day in the life of Richard Hunt :

He meant it affectionately (John is one of the best people I met in Prague), but it is an apt summary of the madness of the time. There didn’t seem much point in spending time on a business strategy document when I could, right at that moment, interview people, send them to clients, and get paid.

I did though, have a concept, it was based on how it worked in London. The specialism in marketing and marcomms seemed to me an obvious competitive advantage. I would understand the requirements of the roles clients needed to fill, because I had filled them myself. In London, in world-class companies and agencies. So my assessments would be a plus for clients too, because I understand what it took to fulfil these roles successfully. I could also “sell” the role and the company to the candidate, which was important since everyone had choices in 1995.

That’s the  “core concept” that has remained relevant to this day, and most of the early clients such as John, and Serge Pycke, thought it was important, but in truth even they used any way they could to fill vacancies, because empty chairs were one of their biggest business problems. It was the ultimate “results business”. I decided to operate on the basis of success fees, because that was how all the specialists in London operated. It was several years before I even found out that this was called “contingency” in the recruitment world, and that serious executive search consultancies wanted to work on a “retained” basis. When I heard about the retainer fee structure, I thought it was frankly a bit of a scam. Surely, I thought, what clients want is a candidate that I can clearly demonstrate to confirm to the brief, and quickly? Not a long-list of “possible”, who might not be any good, or might not be interested in moving jobs. Surely they wanted a very short list of people who would not waste their valuable time if they met? That was true in the first few years because most of the clients were fast-moving, decisive, and confident in their ability to choose employees. But later I started to encounter the clients who could not choose unless they had seen several candidates; and later still, HR people (who will get a chapter of their own J) . I gradually started to understand the rationale of the retained system. What kind of business carries out a service, to a very high level of competence, for several intense weeks, and then ends up with nothing?

Nobody had ever really trained me in interviewing either; but again I took inspiration from the headhunters whom I had met in London. Candidates were surprised to find that I did not have a set of routine questions, but tried to find out what they were good at, what they enjoyed; they were surprised that I gave out advice for free. Indeed my first ever candidate came into the office after she had received the offer from Radio Kiss. “So are you happy with the offer, Blanka?” I asked. She was. “So will you accept it?”. She would. But she just sat there, smiling, waiting for something and only then it dawned on me that she expected me to charge her a fee just as the agency had done which had found her the au-pair job in London earlier.

I was winging it; but all around me, everyone else was winging it. Josef Havelka was leading Leo Burnett with a high profile, based on the perception that he had 20 years agency experience from Leo in Germany. I don’t know if Josef ever said that; it was just the word on the street, and I certainly believed it . It was only well into 2000s when I read a Leo credentials pitch, wherein Josef admitted his German agency experience had been 18 months, and he had previously worked ina record shop in Hamburg! His fellow agency trailblazer, Marek Šebest’ák was even more candid about his lack of experience. He almost made ‘winging it” a selling point! Nils Jebbens was a young Norwegian who worked in marketing for Austria Casinos, then one day he left to open a restaurant called Kampa Park, and the rest is history.

Jo Weaver, whose office I squatted in for the first few months had little signficant marketing experience to speak of when she set up JWA. More than once, when we were musing over lunch at V Zatisi, she said to me “Do you ever feel like a bit of a fraud?” She was referring to herself, rather than me, and was being very hard on herself, but the words resonated with me, because that vague fear was behind my adoption of the success fee model. “Headhunting” (itself a mis-used term here, especially in the early years) had a reputation not much better than that enjoyed by estate agents. The success fee system enabled me to be guilt free. I got out of bed each morning knowing that I would not earn a single koruna unless I fulfilled the client’s requirements, 100%. Furthermore, if I failed, there was no safety net of State benefits, and I didn’t want at all to return to being an advertising agency employee. There cannot be many better incentives to be focused on how you spend every minute of your working day.

In retrospect, those of us foreigners who were ‘winging it” were to some extent rewarded for believing in the future of the country. We arrived through a unique window in modern history. We succeeded not because we were brilliant, but because we were competent, and adapted our competencies to the realities of the emerging market; and we did not mind too much if the comforts of Western lifestyles were often missing. We were given the chance to set up and run our own businesses. I could not have set this business up if I had moved to, say, Amsterdam in the early 90s. What competitive advantage would I have had there? The same is true now for anyone wanting to start their own business here; it’s a mature market, albeit always about 5 years behind the North-West European markets, at least in the marcomms sector.

I thought about whether I should have an office in the centre. But offices in those days were pretty makeshift, even for the biggest companies. I lived on the top floor of a nice villa in Podoli. The landlord showed me a small apartment on the ground floor with a separate entrance, and its own facilities, including a phone line. Did I know anyone who might rent it? I remembered that Gary Stolkin was successfully operating out of his apartment in Chelsea, so I took on the apartment as my office. After years of the London commute, the 30 second walk to my office was quite something, and candidates did not seem to mind coming to Podoli. I decided that the low rent allowed me to invest in nice office furniture, and the best tech equipment. But for the moment, it wasn’t the tech that was reaching either the clients, or the candidates; they just seemed to appear, as if by magic. I didn’t stop to think much about how this was happening, and how long it might last. Interview, fax cv, fax invoice. Living the dream? I never even had time to dream…